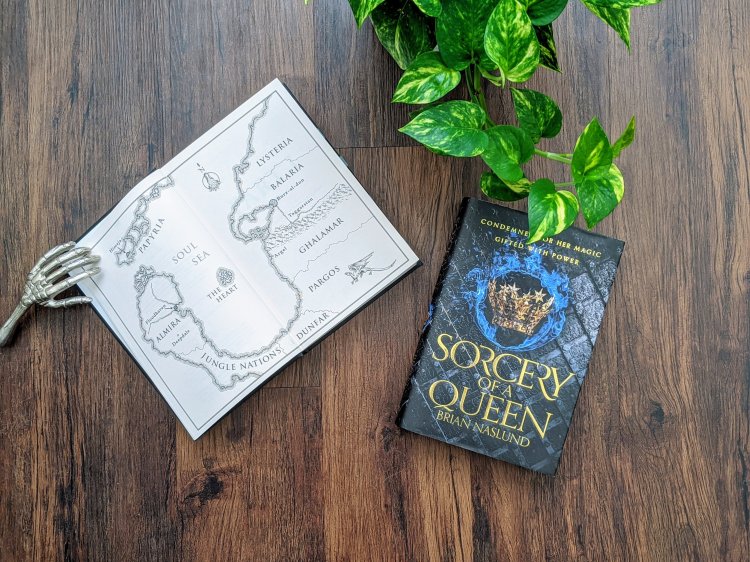 Sorcery of a Queen by Brian Naslund is the follow-up to Blood of an Exile and the second book in the Dragons of Terra series.

The story continues on from the bloody battle of Floodhaven. Queen Ashlyn has been presumed dead after conjuring a spell that managed to kill those that attempted to cause her demise. Now banished from her Kingdom, Ashlyn along with Bershad and Felgor have managed to escape on a boat that is set to travel to the where Ashlyn’s mother was born, the island of Papyria. Once there, Ashlyn learns of a way to unlock the true potential of her magic. Thus, she sets off to learn more about her power and find a way to utilize it more effectively. Bershad is a man who is running out of time. His mutation is slowly beginning to work against him so he must do his best to push on and help Ashlyn reclaim her throne.

The first book, Blood of an Exile blew me away with it’s fantastic range of characters, dialogue, and the amazing world the author has created. I can honestly say Naslund does not disappoint with this sequel. Although I was nervous because of the curse of second book syndrome, the first sentence in the book put me at ease straight away.

From there I just knew I was in for another brilliant read. I was entranced from the very first page as I sunk deeper and deeper into the story. There was nonstop intrigue and excitement as Naslund never lets his foot off the gas peddle.

I was so glad to be reunited with the characters of Bershad, Ashlyn, and my favourite thief, Felgor! The dialogue between these characters is nothing short of brilliant. All three are an unlikely trio yet their personalities effortlessly bounce off each other. The stakes in my opinion are also even higher than Blood of an Exile and you feel that a lot as the characters rush to find the answers they need.

“Let me get this straight. Sitting on this ship, we have a stranger who claims to be a witch queen. An emperor-killing exile. And notorious thief.”

We begin to learn a lot more about the origins of Ashlyn’s powers and how she can utilize them. Science and Ashlyn go hand in hand as she uses her knowledge to unlock the hidden secrets of her powers. This is also the case for Bershad who must utilise his years of being a dragon hunter and his special ability to protect Ashlyn and Felgor. However, I felt a lot of sadness for him towards as his powers slowly begin to work against him.

Bershad definitely gets his ass whooped many more times in this book. So much so I wanted to look away from the pages. After the loss of his best friend in the first book and his trusted steed Alfonso, I had this constant feeling of dread at what was going to happen to him.

Felgor makes his return in the sequel and boy was I glad! Felgor for me should have his own book because my god what a charismatic and fun character he is. His comedic timing is so on point as ever and he is able to instantly turn serious situations into moments of hilarity.

We also manage to see from the POV of some newish characters. The young alchemist Jolan returns and finds himself hunkered up with a the Jaguar Company. These are a group of warriors consisting of their leader Cumberland,Willem, and Oromir. I loved the bond that develops between Jolan and these band of merry men. At first the jaguars are pretty apprehensive about Jolan joining them, but he soon finds himself becoming a useful member of the group. They become the family he never had.

Jolan is also able to develop further during the process. He manages to gain a better understanding of who he is and what he wants in life.

My favourite addition to the story was definitely seeing from the point of view of Princess Kira. Kira is the sister of Ashlyn. What I loved about her was her ability to outsmart nobles in order to gain power. The power plays she makes behind the scenes was just pure genius. It was like watching a game of chess being played as Kira cunningly moved each piece in her way to get what she wanted.

“They filled their own pots. I’m just stirring things up.”

When considering the world building, the world created by Naslund is as rich as ever. The impact that dragons have on the environment and the role they play in claiming the ultimate power again plays a key role in the story. Dragon oil for example is a resource more valuable than gold. But gaining it comes at the cost of impacting the bio diversity of the world. For people like Ashlyn, it is important to preserve the balance. Whereas for mad scientists such as Osyrus Ward, it’s all about doing whatever is necessary to get results even if it means the deaths of thousands.

Technology and science plays an even greater role in the sequel. The experiments conducted by Osyrus Ward who is one of the main antagonists, results in the creation of flying airships capable of destroying cities. But Ward’s research hasn’t been without controversy. Ashlyn learns about the full extent of Ward’s research which honestly, was absolutely horrifying. I thought Ward was nuts in the first book but this time round you realise he’s a sadistic b*****d.

Overall, The Dragons of Terra series is something I feel more people should be talking about. Both books so far have been perfect and have exceeded my expectations. I thought Blood of an Exile was great but Sorcery of a Queen is greater than great. This plot is exceptional, the character development is off the charts, and the world building is phenomenal as ever This is a series I feel everyone should be talking about due to how amazing my reading experience was. I am beyond f****** excited for book three!

Thank you to the absolutely wonderful Siobhan and Tor for giving me the opportunity to read this book and the previous book. I am so grateful to have been given this opportunity and share my thoughts with other readers.