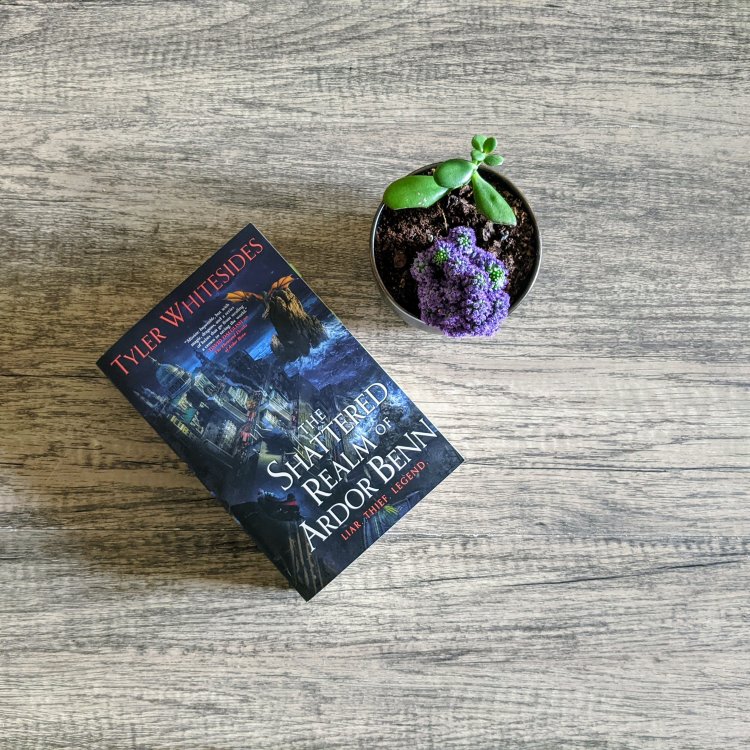 The Shattered Realm of Ardor Benn by Tyler Whitesides is the second book in the Kingdom of Grit series. It continues after the events of the first book where Ardor Benn along with his best friend Raekon and master thief Quarrah Khai saved the world from impending doom. However, the chaos has continued in the form of a war between the Troithans and Landers which isn’t going to end until both have obliterated each other.

What also hasn’t changed is Ardor and Raekon getting themselves into trouble during a job. Having barely escaped from a ruse gone wrong, they hide inside of a carriage in which sits Lady Abeth whose husband and former king was murdered. To make matters worse, her son Shad Agaul was soon assassinated. This in turn left Shad’s uncle King Termain in charge. King Termain in simple terms is a prick who has appeared to have murdered his way to the throne.

Lady Abeth believes her son is in fact not dead as there are many missing links to the events the took place during the cause of his assassination. Mistaking Ardor and Raekon to be detectives, she hires their services to find her son and make him the rightful heir to the throne and Kingdom. Ardor takes on the task and promises to find out what happened to Shad. However, upon investigating using the his skills and ruse mastory, Ardor soon discovers that things are more than what they seem as a secret organisation known as The Realm may have had a hand at Shad’s disappearance.

“We are the shape of the shadow. The eyes in the darkness. We do not grin or grimace, but we are the cause of both. Faceless, we unite, serving our silent cause until Ashings, so abundant, spill from our very mouths. We are the Realm.”

This series so far has been exceptional in every way and has quickly made its way to being one of my favourite fantasy series. I love the humour between Ardor Benn, Quarrah Khai and Raekon. These three have such great chemistry with each other which made my reading experience even better. The comedic elements are again on point and even better as Ardor and the gang somehow pull off the most impossible cons.

Ardor Benn has a lot more on his hands this time in the form of the mysterious organisation known as The Realm. They are a formidable foe due to how mysterious they are making it difficult to tell who exactly who is in charge and who is a member. I absolutely loved how the sequel had a lot more mystery compared to the first one. For the first time ever I actually felt worried whether Ardor would be able to pull off this job as he was most definitely up against it from all angles. In particular, The Realm have members located everywhere making it more difficult to trust people. Members have to wear masks and there are specific code words that must be used when meeting other members.

However, even when things are sticky, Ardor always some fricking how manages to get himself out of his own messes which continues to amaze me and make me laugh so much. Ardor is extremely charismatic and loves to be at the centre of things. However his ego and need for attention usually gets him into unnecessary situations which can often impact those around him. The situations he gets himself and others in and then gets himself out of had me literally laughing my arse off.

In terms of the characters we meet some new ones and returning characters from the first book. The friendship between Raekon and Ardor Benn is a joy to read as both bring out the best in each other. Where Ardor is the reckless one who goes into things without thinking, Raekon is the voice at the back of Ardor’s head that attempts to stop him from doing crazy shit. Although, even Raekon can’t stop Ardor once Ardor is set on something 🤣. Their relationship is also tested slightly as Raek has become addicted to Heg. Events occured in the first book that led to Raek getting injured. This has resulted in him becoming addicted to Health Grit in order to ease his pain.

I was also so so glad Quarrah Khai makes a return in the sequel. We see from her POV again as she is tasked by King Termain’s mother to identify whether the Realm have grasped control her son. Quarrah has grown so much since the first book and is an even bigger badass. She is super intelligent and manages to get the better of Ardor at times. Although Qurrah and Ardor have wee feelings for each other there’s still lots of tension due to Ardor being so outlandish at times. As much as I love the character of Ardor Benn I did want to punch him at times due to his arrogance 🤦🏽‍♂️.

This leads me to discussing the discovery of new elements that are added in terms of the world building and the magic system. Many chapters focus on the new character of Professor Portsend Wal in his laboratory attempting to discover new types of Grit. Grit is basically a powdered substance that comes from dragon shit. Combining it with other elements allows for the formation of different grit types. Portsend is under pressure not only from the king bit also The Realm! This leads to many thrilling moments as Portsend must juggle in his attempts to keep both parties happy.

Although it was interesting learning the theory behind the development of new grit and what they do, those chapters sometimes came when things got really exciting!

The religion of Wayfirsm also plays an even bigger part in the second book. We finally discover more about the ancient beings known as the Homelanders and also many other secrets that have been hidden for centuries. Being the cunning individual he is Ardor is able to use this information to create a ruse within a ruse within a ruse which when you read the book will blow you away.

Overall, Tyler Whitesides again shows why he is such an amazing writer! He’s created this amazing world that you can instantly just fall into, and a group of characters that are hard not to love. The action is again phenomenal with so many amazing set pieces that occur. The fighting towards the end was phenomenal as a full on siege takes place with canons blazing past heads and different forms of Grit being used left, right, and centre. The mystery elements also kept me glued as I discovered even more about the world building and the origin of the Homelanders. If you’re looking for a series to start next year then this should definitely be up there at the top of your list!