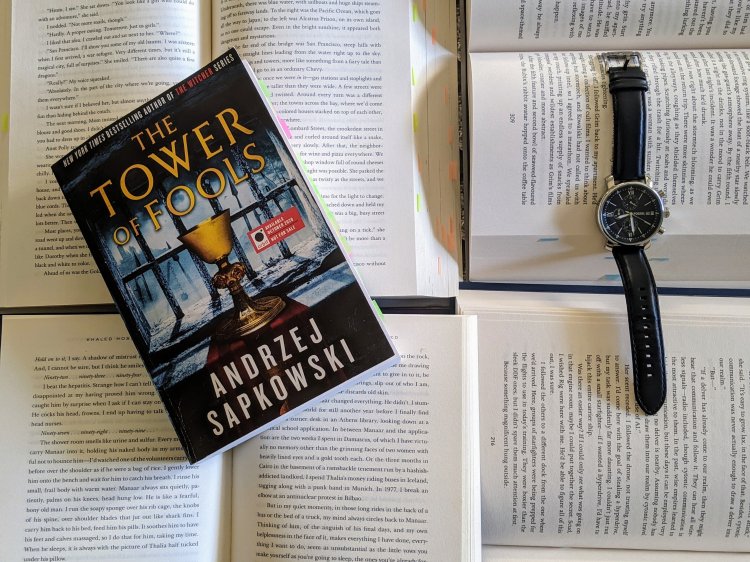 “O, young fool!’ said the priest a moment later. “You ought to be Locked away at once in the Narrenturm, the Tower of Fools! You would fit in perfectly with its residents.”

The first word that comes to mind when I think of how to describe The Tower of Fools is “different”. You would be mistaken if you think you’re going to expect similarities to Andrzej Sapkowski’s highly acclaimed Witcher series. This is most definitely not a Witcher book. Compared to that series, there is only a smidgen of Fantasy and it instead focuses more on the Historical Fiction side of things, particularly the Hussite wars.

The story takes place in Silesia during the Hussite Wars in 1425. It tells the tale of Reinmar of Bielwa, a magician and academic. Right from the beginning Reinmar finds himself in deep trouble having been caught between the sheets with Adele of Stercza by her brother in law, Wolfher of Stercza. Although Reinmar manages to escape, the ruckus and mele results in Wolfher’s younger brother being killed.

Thus begins a series of unfortunate events (ba dum tish), as Reinmar finds himself on the run from the Stercza’s who are out to get revenge. Reinmar faces many awkward situations in his attempts to get to safety and not get caught by the Stercza’s. Along the way, Reinmar manages to make a few companions but twice as many enemies 😶.

So Tower of Fools was a strange read for me. At times I found much of the dialogue to be really dense and the time period in which it was set had me really confused at times. I had never heard about the Hussite Wars and didn’t have much knowledge of things that happened during that period. I felt like my brain was being bombarded with all this dense information regarding different people, sects, and religions that my brain felt fried. Some of the dialogue was also such a drag at times that I’d be itching for the chapter to end.

I must also add that some chapters were loooooong, almost 20 pages at times. The worst thing is, some of the chapters were basically just pure info dumping that wasn’t really taking the story forward.

However, what made me continue to read this book was the humour, side characters, and the situations Reinmar gets himself into.

Firstly, the humour in this book was absolutely brilliant. The Witcher books and games are renowned for the hilarious moments and dialogue that occurs between characters . This is something Sapkowski again showcases through The Tower of Fools.

On his journey Reinmar meets a lot of brilliant side characters. His main companions throughout the his travels are Scharley, Samson, and Urban Horn. Scharley for me was absolutely hilarious.

“Just look,’ said Scharley, stopping. A church, an inn and a brothel, and right in the middle of them a pile of shit. Here you have the parabola of human existence.”

I loved his sarcasm, wit, and the way he would put Reinmar in his place for being an absolute idiot. The funniest thing is, Scharley isn’t the most pious of men and whenever Reinmar caught Scharley doing something immoral, Scharley would remind Reinmar that he has no self control when it comes to the ladies

‘Aha. A person who’s accustomed to bedding other men’ wi is teaching me morals.”

Samson was although not a talkative individual had some really great scenes and saved the day for both Scharley and Reinmar many times.

Other than Reinmar’s companions, we meet lots of other characters and I mean alooooot. Each of them were unique and brought something different to the story. Many also play a key role in saving Reinmar’s from losing his head. I especially loved the different knights Reinmar comes across. The Knights gave me a western cowboy feel. Reinmar also meets many religious fellows and groups that added even more drama.

Now to the character of Reinmar. In simple terms Reinmar is an absolute tool that you can’t help but want to backhand because he always gets himself into a mess. If Reinmar had the Midas Touch rather than turn things to gold, he would turn things into bronze. Rather than fighting by your side, Reinmar would be the type of person to make a run for it and hide under a fair maidens skirt.

Just when you think Reinmar couldn’t do any more stupid things, he ends up topping the previous stupid thing he’s done with an added cherry on top. Throughout the story it’s others mainly Scharley and Samson who have to save him from getting his head chopped off or his balls cut off.

Like Dandelion from the Witcher series, Reinmar has a tendency to blurt out things he shouldn’t have shared which made for an even funnier read. Reinmar also gets stuck right in the middle of many conspiracies that lead to him being wanted dead.

Also like Dandelion, Reinmar has difficulty controlling his pecker. Most of his rash decisions occur as a result of his biggest weakness, women.

“And so, he thought, I’ll ride to Adèle, to rescue her. Like Tristan to Isolde, like Lancelot to Guinevere. A fool’s errand straight into the lions den, perhaps, but my pursuers might not be expecting such a risky gambit.”

I am can’t say anything without spoiling, but my god Reinmar is so deluded at times that you can’t help but feel pity for him lol. I felt bad whenever he got into trouble but also happy because he was such a tool🤦🏽‍♂️. His decisions always came to bite him in the ass.

“Listen carefully, you incorrigible ass. You constitute a lethal threat to me by the mere fact of your existence. I won’t let increase the threat by your idiotic behaviour and exploits.”

He is however a really really interesting character who although has many flaws, I still tried wanted to root for. Behind is foolishness he’s a highly intelligent individual who if to put his mind to it could become a really powerful mage.

Finally in terms of the world building, Reinmar travels across Silsea and many other places such as Zièbice, Frankenstein, Bohemia, and many more locations. I loved the medieval feel and the way Andrzej created this really dark atmosphere Although there isn’t as much magic as his previous books, there are some in the form of mages, witches, demons, and werewolves that appear sporadically.

Overall, I think what saved this book from becoming a drag was the side characters and the situations Reinmar finds himself in. There’s also a lot of conspiracy and backstabbing that occurs that makes you want to continue on to find out who is behind it. I think my own expectations made me assume that this was going to be another Witcher book but boy was I wrong. Although there are monsters and some elements of magic, it’s very much a Historical Fantasy novel.

I do however stand by the fact that at times there was a lot of information dumping and chapters that were pretty much pointless. I will hopefully continue this series as I’m intrigued to see Reinmar’s journey to the end and also more of his c*** ups 🤣

Thank you so much to Angela and the Orbit team for sending me an early copy. The book is out on the 27th of October 2020😊