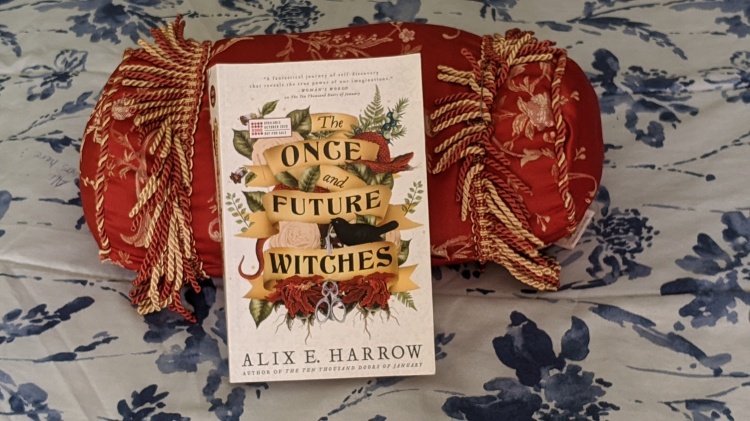 When I think about some of the best books I’ve read in 2020, The Once and Future Witches by Alex Harrow is most definitely standing tall in all of its witchy glory. This book brought the magic, soooooo much magic to heart. It also brought back so many memories of me and my mum waiting in anticipation to watch the TV show Charmed. Even thinking about it now warms my heart because things were tough growing up with just me and my mum. TV shows like Charmed made our Saturdays something to look forward to. Anyway I am babbling and getting way to deep as so lets move on to what the story is about.

Well, once upon a time there were three sisters. They were the Eastwood sisters, Bella, Agnes, and Juniper James. They once lived in a world were through magic women were powerful and used their powers to make a difference on peoples lives. This however has now changed, women can no longer allow that spark of magic inside of them to shine. For if they shine brighter than man, they are considered ungodly and more powerful than man. Women are made to feel inferior by men because they can’t handle women having power of any kind, not even a smidgen.

Although plagues and purges have taken away the power witches once hand, witchery has never truly been erased however. Over the centuries old witch stories and spells have been hidden away secretly passed down from mother and daughter. These stories highlight how witches were misconstrued and were not truly the villains of their stories.

Life was already tough for the Eastwood sisters, but the death of their mother during the birth of Juniper only made things worse. Their father was a violent drunk who tormented the three sisters due to their mother being a witch. The hurt he inflicted upon them is something the sisters can never forget. Their father stopped at nothing to cause them pain and break their bond apart.

In the end their fathers poisonous ways succeeded. Bella was pushed away to a school for ladies and Agnes was driven away in order to protect herself and another life. Juniper was the only one left to deal with her fathers tirade. But, after pushing and pushing Juniper towards the edge, the only outcome was for her to strike.

Now with her father dead, Juniper must go on the run after being accused of committing his murder with the use of witchcraft. In no exact direction, Juniper soon finds herself in New Salem in the year 1893 where she witnesses a rally involving suffragists who want are looking to gain the right to vote. This spurs something inside of Juniper, a fire that will not go out easily. Juniper wants to bring change that will give women the power to make their own decisions and not be controlled by their husbands and men.

As fate goes, through the power of magic and an unbreakable bond, the three sisters find each other in New Salem. This is only the beginning of their journey, for what follows is each of the sisters discovering who they truly are and that together they are more powerful. However, a formidable foe awaits them, one that has been a menace since before they were born. They must confront the dark shadows in their path and be each others light in overcoming the darkness.

What I absolutely loved about this novel was the contrast between each of the sisters. We first have Beatrice Belladonna Eastwood the eldest sister. Bella is a highly intelligent individual. She is book smart and is constantly to gain knowledge. Behind the shadows she is always peering into the darkest corners for knowledge regarding her witch ancestors and the stories of old. That spark inside of her is ignited further by Cleopatra Quinn aka Cleo a journalist for and who has her own secret agenda.

We then have the middle sister Agnes who at the start of the story she is with child. For Agnes, trust issues are a major thing. She has had her trust broken in the past and now attempts to keep to herself so she and her child don’t get hurt. A central theme for Agnes’s character is motherhood. Agnes wants her child to live in a world were she can make her own decisions and achieve all of her wildest dreams. Agnes will therefore do whatever she can to protect her child and see that no harm comes to her. That means steering well clear of any form of witching. However, as the story moves forward and old relationships are mended and new relationships form, Agnes soon realises that she must rethink and become more accustomed to letting people into her life.

Last but not least we have June Juniper Eastwood. The youngest of the three sisters and an absolute rebel and boy do her sisters know it.

“Juniper shrugs. “So I’ll be more careful than they were.”

You don’t have a reputation for careful, June.”

I absolutely loved her passion to make a change to the lives of the woman of New Salem. That fire and rage inside her truly explodes after witnessing the suffragist movement. Soon June realises that her craft as a witch can help free the women of New Salem from power thirsty men who just want to control women. Soon Juniper becomes the magnetic force that brings together her sisters and the women of New Salem to realise that this power hungry barrier established by men can be blown away. Juniper helps them realise that they are more powerful than they think and sets in stone events that would change their lives forever. Yes it’ll be dangerous, but sometimes taking the biggest leap in life can prove the most rewarding.

I loved all three of the sisters and seeing them grow from strength to strength while also uncovering their weaknesses made for fantastic reading. Their passion was magnetic and had me so hyped up.

“The wayward sisters, hand in hand, Burned and bound, our stolen crown,

But what is lost, that can’t be found?”

In terms of the writing, hand on heart the writing was the best writing I’ve ever come across. It flowed effortlessly and lyrically which entranced me. You feel every word burning inside of you due to how vivid and descriptive it is. Alix Harrow is one of the most phenomenal writers I’ve come across. I’ve bookmarked so many passages that I could reread them again and again. I also loved how the story was told from the perspective of all three characters as it gave the opportunity to truly understand of each of the sisters allowing for so much depth.

Overall, the Once and Future Witches is an absolutely wonderful read that makes you realise the strength of women and the BS they’ve had to endure. It was an absolute joy seeing the three sisters coming together in order to break the barriers that they have been burdened with. It’s a powerful story about taking back power and realising that no matter how many times you fall, you must keep getting back up and be ready to fight the good fight again. This my friends is a story about hope and realising that the bond and love you have with your family and loved ones can never be truly broken, no matter how many times life may try to break them. I have nothing but praise for this novel and can’t wait for more books by the author.

Thank you so much to Angela and the Orbit US team for sending me an early copy. This is my first time reviewing for Orbit US and I’m super excited for what is to come. The book will be released on the 13th of October 2020😊