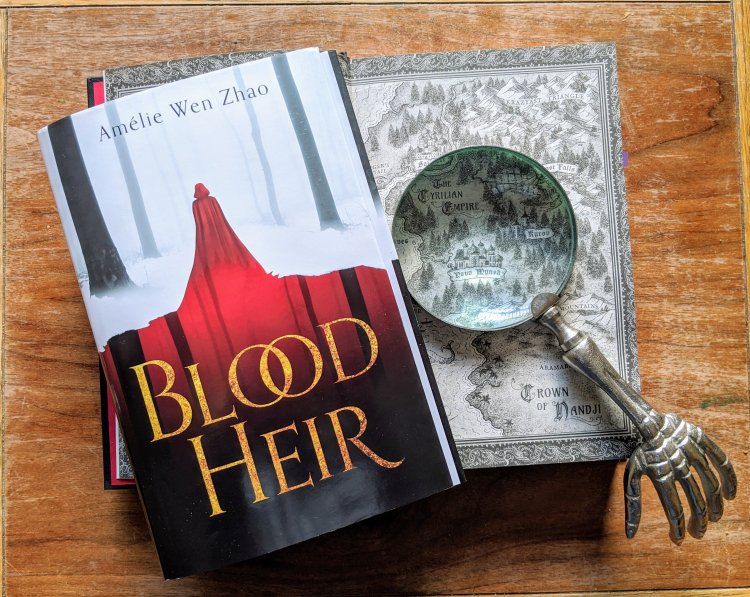 Blood Heir by Amelie Wen Zhao takes place in the Cyrillian Empire where there exists “Affinites They are individuals with varied special abilities which take advantage of the elements i.e. earth, wind, fire, ice etc. To some these powers are dangerous and unnatural people who must be controlled. The stories main character Ana Mikhailov is someone who is an Affinite, but is also the crown princess and no one knows of her secret gift. Her gift is that she can control blood and as a child something terrible happened in relation to her power which means she can’t venture outside the palace. But with her father now murdered and Ana framed as his killer, she must escape the palace to clear her name and find her father’s killer. Helping her is Ramson Quicktongue, a well known conman and liar who has his own terrible past. Somehow their paths align and both must work together to make things rightSo yeah Blood Heir was a pretty decent novel. I thought the writing was good and it flowed well. It didn’t feel rushed at all and all of the twists and revelations unfolded like a Terry’s chocolate orange. So yeah theThe pacing was good enough not to make you fall asleep. One of my favourite parts was the way in which a place in the book called Novo Mynsk was describedIt was a city of extremes where white marble houses and gilded roofs oozed opulence towering over dark alleyways in which the wet smell of gutters lingered death”I would say the world building was definitely the main highlights of the novel
and I liked how it was inspired by Russia in terms of the names of some of the characters and the way the setting was described. The author does well in depicting a more darker version of winter wonderland 😅.The magic system was also pretty interesting in having people who have different forms of the Affinite ability. Even though they have these powers they have their limits and can’t use it up in one go without any consequences. I guess this makes it more realistic as we all have our limits.I do feel though that they were a few cliches throughout in terms of the world building and it felt kinda copy and pasted in the sense that I’ve already come across the whole “oh they have powers we will make the bad guys exploit them and then they rise up” or “ohh he’s a bad bad boy rebel but has a good heart on the inside”. Blood Heir reminded me a lot of the story line of an Ember in the Ashes and Children of Blood and Bone which follow the same direction.In terms of the characters I thought Ana was really interesting and I her character development was well done. She goes from being someone who is naive and believes that the world outside the palace is all nice and dandy but once she starts to see what is really going on she realizes she has to do something about it. Her back and forth with Ramson was also both funny and moving. Obviously a romance element is there but it’s not in your face, it’s as light as a feather falling on your head.In terms of Ramson he was the best thing about the book. He had a good sense of humour, I enjoyed how he had so many tricks up his sleeve and I feel his backstory gave him so much depth that you understood why he became this ronound untrustworthy criminal. I really felt for him and his inner battle to do what’s right but he’s so used to being a dick that he can’t help but be one. But again not saying this in a bad way but I’ve seen this countless of times in other books.Overall, I did enjoy the novel and I do look forward to continuing the series. The ending leaves you wanting more and I’m excited to see what happens. But the storyline doesn’t seem new to me due to the cliches and similar feel it gave me of other books I’ve read. But it has a lot of potential to improve though and i think if it does it’ll be even more enjoyable.Thank you so much to Harper Voyager and Felicity for sending me a copy. I’m very grateful 🙌🏽