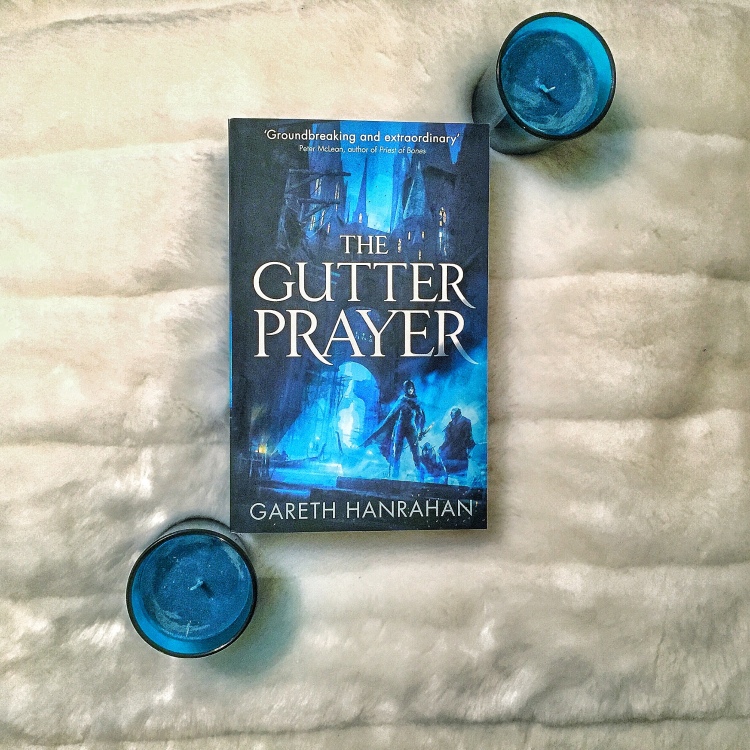 Firstly, thank you so much to Orbit and Naz for sending me an early copy of this book! I’m very grateful 😊

The Gutter Prayer by Gareth Hanrahan is my first fantasy novel of 2019 and I must admit I am so glad I started with this one. From start to finish this book was an exhilarating read and kept me wanting more! I’m not surprised at the praise it’s getting as it’s definitely different to conventional fantasy novels.

The story takes place in the dark and grim city of Guerdon which has seen its fair share of changes. It’s a city which has been marred by violence and villainy above and below. Outside of this city a war is raging on, the Godswar to be exact. However, although the walls of the city protect the people within the walls of Guerdon, an old enemy is being awakened inside it and only death and chaos await. Who’s going to stop this, you ask? A human(Carilion), a ghoul(Rat) and a stone man(Scar), their loyalty to each other will be tested as many dark unknown secrets await them.

Ok so firstly let’s talk about the cover! From the moment I saw the cover I just knew it was going to be bad ass and dark! I can always count on Orbit to have great book covers.

Anyway, let’s get to what’s inside the book. I’ve never really read any grimdark fantasy and let me tell you the story and world is dark indeed! I was absolutely blown to smithereens by the characters and world building within this novel. The three main characters are caught in the crossfire of an ancient magical war between ghouls, worm men, sorcerers, gods and all kinds of demented creatures (Tallowmen) that you could never imagine! You can clearly see how much time has been put into creating such an interesting and imaginative world.

I would like to take a moment to talk about this because I found the different types of creatures in this world astonishing. When the story begins we first meet the Tallowmen, they are basically previous living beings whose bodies have been melted down and turned into candle like monsters that function due to the flame burning inside of them on a wick. These things are meant to make you feel uneasy as they will destroy everything in their path. You also have many more like the Crawling Ones which are worm like creatures, Gullheads, Fever Knight(scared the shit out of me). Moreover, the fact that there are ghouls living underground with cannibalistic tendencies was very disturbing and reminded me a lot of the creatures from the horror movie “The Descent”. What’s even more disturbing is that one of the main characters Rat, is a ghoul which makes it even more uneasy 😂. I could go on and on about the creatures but I don’t want to spoil too much!

Anyway, I was soooo engrossed by the story, it’s just so different to any fantasy book I’ve ever read and it felt so new and fresh. Every page had me wanting to read more and more as there was so much happening. Gareth Hanrahan does a wonderful job in keeping you hooked to the story and it’s characters. I never knew what to expect at all and found this unpredictability so exciting, uncovering the dark secrets of this even darker city was so fascinating and chilling. Each chapter elevated further and further than the previous which didn’t stop right until the end. Speaking of the ending, I absolutely loved it. The action scenes were fast paced and very thrilling. There’s nothing worse than getting towards the end and the conclusion being lacklustre but thankfully this didn’t happen!

Moreover, the character in the novel were great, but not just the main characters, all of the side characters in the novel had a purpose and were key to the story. From the thief taker Jere who I absolutely loved and reminded me of Van Helsing to the eccentric professor Ongent and also the mysterious leader of the alchemists Rosha. In terms of the main characters, I really enjoyed their unlikely friendship I mean could you ever imagine the trio of ghoul, a stone man and a human walking into a bar? Well look no further because you can now guys! I truly loved the dynamic of their friendship and was genuinely worried about what the story held for them. One character however who stood out the most for me was the side character “Thief Taker” Jere. The man had such swagger and I enjoyed his humour, I always looked forward to seeing his character kick ass with his trusty cane.

However, even though I loved the characters, the highlight for me is the world-building and lore within this world. I was pleasantly surprised by the originality of the world and I was basically awestruck by the lore. Especially things such as living gods and ancient monsters like Black Iron Gods were just exceptional and so imaginative. Fantasy novels that are able to bring something fresh and original are always great considering how repetitive this genre can become. There is also so much history uncovered about Guerdon in this book that I just can’t wait to discover more in the next book! I honestly felt that this city created by Gareth Hanrahan is a character in itself because at the core of everything Guerdon is the engine that keeps the story going.

In conclusion, this is a very fresh and original take on the grimdark fantasy genre. It’ll take around 100 pages to get fully engrossed into the story, from there expect fast paced action, great characters and a dark world that quickly swallows you whole. The only issue I have is that sometimes I got confused at what was going on due to the story going from one character and switching so quickly to another. It did make me have to read over some pages again to get my bearings. Also if you’re squeamish this might not be for you as there are a lot of “blerghhh” moments. However, even so this did not at all feel like a debut novel to me. Gareth Hanrahan is an incredibly talented writer who has created a world and a group of characters you become instantly engrossed by. I will not be surprised if this in the list of some of the best fantasy books of 2019. If you are a lover of fantasy novels then you should definitely consider buying this.

The book is out on the 17th of January👌🏾