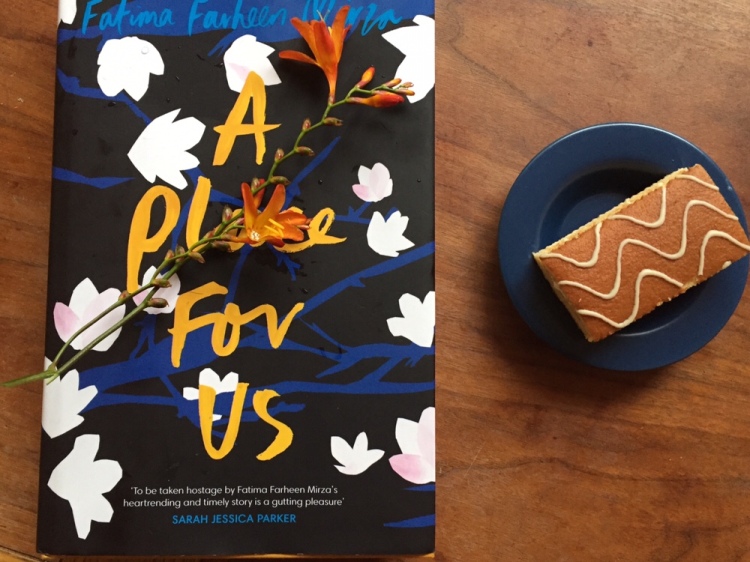 For many years now I’ve wanted to read a book that i really connect with personally, emotionally and culturally as i am a Scottish/Pakistani and also Muslim. A Place for Us by Fatima Farheen Mirzani is finally one of those novels that i have connected with and i am so happy about it.

The story focuses on an Indian-American family of five, Rafiq and Layla who are the parents and also their children Hadia, Huda and Amar. The novel opens with Amar an outcast within the family returning for his sisters(Hadia) wedding after being away for 3 years. Using flashbacks from multiple points of view, we see how and why the dynamic of this family changes over the years. I was so invested in each character Fatima Farheen Mirza made it so easy to find each of them interesting  and unique and i was able to find  a common ground with them. One of those characters was Amar who is constantly at war with himself and his faith(Muslim). No matter how hard he tries to take it seriously and live by the rules of being a good Muslim he would rather do what he wants but is still in fear of what he should do. I found common ground with him as even i do my best to follow the rules of my religion but sometimes fall off that path because of things i wish to do. I also found common ground in Hadia, she is the type of person who would do anything to please her parents especially her father. Its like an impulse where she must do what ever it takes to be the most liked out of Amar and Huda. There is one part where Amar asks for new sneakers if he passes his test which he manages to do and his father being so pleased agrees to buy them for him. However, after an argument with Amar Hadia inevitably snitches on her brother without realising that her actions can lead to consequences in the future. I also felt for her as there was a lot of pressure on her shoulders as she is the eldest within the family. Like Hadia I’m constantly having to make sure i influence my siblings positively and its sometimes excruciating trying to be a good role model.

Moreover,what i also found great was seeing everything from the eyes of the parents. You see that they have a strict set of rules which they want their children to follow i.e. Hadia isnt allowed to go to parties with her friends. They see such things as being wrong due to the culture they come from. They do also regret many of these decisions and wish they had made different choices. Towards the end we see this from the point of view of Rafiq who digests and picks apart what went wrong and what he should’ve done. This part of the novel was full of heartbreak and remorse as we see how much he regrets the decisions he made and how he wishes he hadn’t put such pressure on his children especially Amar. Amar has long struggled trying to find his place in the world and within his family, his siblings Huda and Hadia tend to outshine him academically and in general.

Therefore, i loved how we got to see things from the point of view of each character. Amars journey  is gut wrenching and the journey is like a jigsaw puzzle,each piece slowly coming together to see how exactly things came to be the way they are. The story goes back and forth between Hadias wedding and the past, it was so intense and exciting seeing revelations open up and being able to gain a better understanding of this very complicated family. Personally there was a lot of self reflection with this book it made me realise that if i want to grow as a person i should change many things about myself which i now intend to do. I think readers will learn a lot about themselves and what its like growing up within a Muslim household. For example the novel recounts what the family went through during 9/11 and you get to see how Muslims had to cope with the accusations of being so called  “terrorists” and how unsettling it is living in fear of being judged simply for being Muslim. It will open your eyes to the fact that Muslims are just normal people trying to get through life just like everyone else. Just because a small group of people do bad things doesn’t mean every Muslim feels the same as those evil people. We are in fact loving and peaceful people which i hope readers see through this book.

Its been so hard to write this review without giving too much away. Sometimes i just want to go on and on but I’ve tried not to. What i can tell you is that this novel is so beautiful,so mesmerising and thought provoking. I am very grateful for this book as it really is wonderful and by far one of the best books i have ever read. Fatima Farheen Mirza words touched my heart so effortlessly and its hard to believe this is her first novel. What i learned is that “A Place for Us” is about finding your place in life on so many levels whether that is emotionally or culturally we are all following a map leading to us finding where  exactly we belong in this world. I recommend this book to everyone and i hope you love it as much as i did.