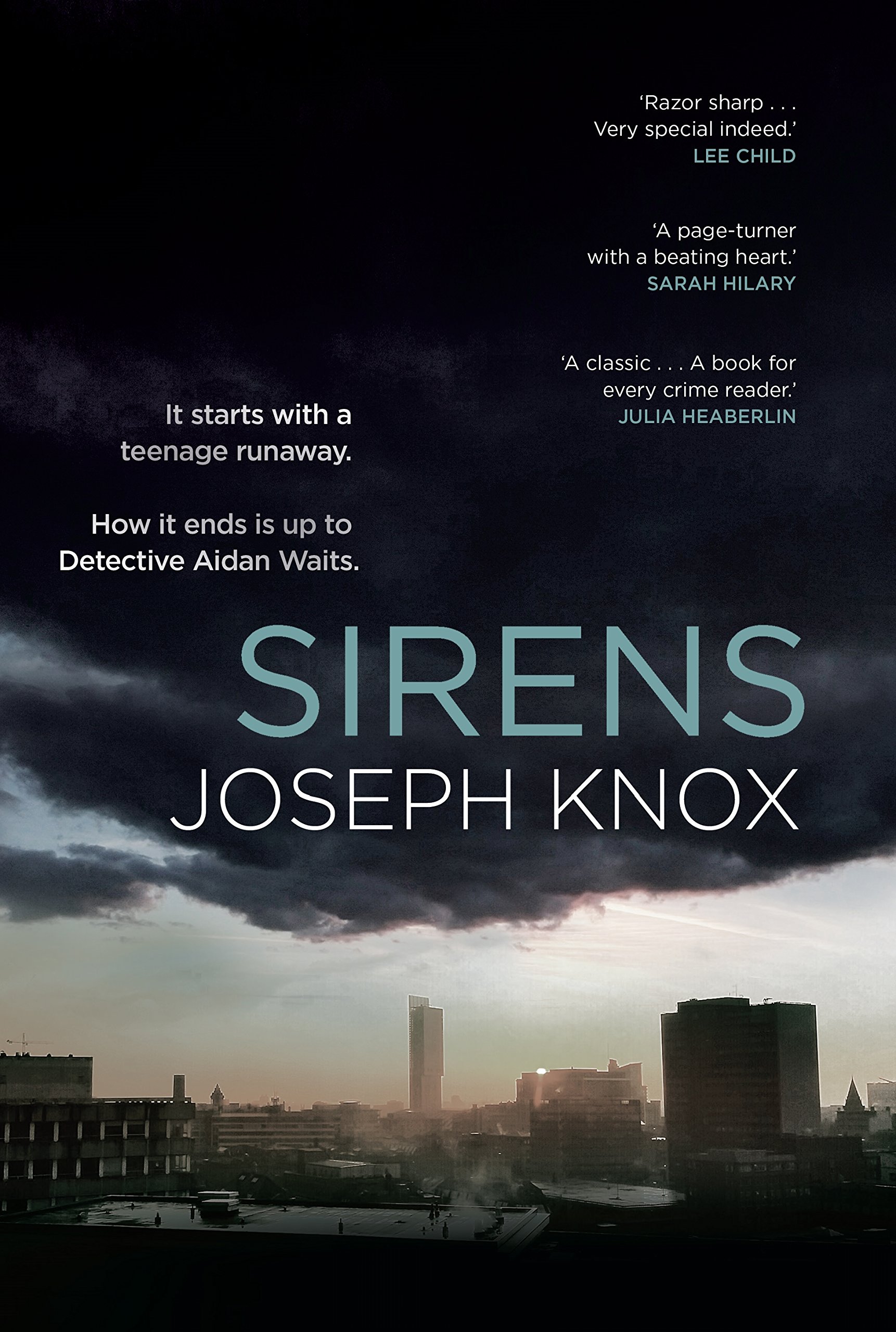 “I realised I’d been grateful for the madness. Without it, memories swelled, bruised and blossomed, until I thought I must be wearing them on my face like black eyes. I turned and looked out the window”.

Ever since I’ve really started enjoying books I’ve always been drawn to detective thrillers. So far I’ve read three this year and Sirens by Joseph Knox has been the best thus far.

The story focuses on Detective Aiden Waits and is set int the dark underworld of Manchester. Our protagonist is in the thick of it as he must infiltrate the under belly of  “The Franchise” headed by notorious criminal Zain Carver. Aiden is someone who is losing is groove and his time is running out, he is on his third strike due to the rules he has broken and is definitely walking on thin ice. On top of that, Aiden must come to the rescue and save Isabelle Rossitor who is the daughter of a well known MP. However,to make matters even more complicated she is right in the middle of Zain Carvers influence and works for his criminal organisation. The question is why has someone who had it all runaway to a well known drug kingpin?

This book is gritty, dark and will really get under your skin. Even from the atmosphere of the book. Joseph Knox depicts Manchester as wet and grey place which goes well with the mood, bets way to describe it is calling it “Grey Britain”. It also goes well with Aiden as a person. Aiden isn’t a good detective, he is a rebel and breaks the rules without sweating, but its these “bad cop” qualities that make him the best person to infiltrate Zain Carvers organisation. We also meet the character of  Sarah Jane who is Zains girlfriend i loved the way the author described when Aiden first saw her

”The truth is that she was a cruel kind of beautiful. Someone you might remember on your deathbed, wondering where your courage had been on the day you met, wondering why your courage only ever surfaced at the wrong time and for people who weren’t worth it.”

Aiden also finds himself sinking deeper into a hole he cant escape from as he falls for Cath who also works for Zain Carver collecting his drug money. Aiden wants to help her and get her out of this mess, but hes so knee deep in shit himself that it causes even more issues.

I absolutely loved this novel, each character was interesting and brought their own special qualities. The character of Zain Carver for example, he comes across as a suave and charming business man, but on the inside hes an absolute monster which we find out as the story unfolds. Moreover, the character of Aiden may seem like a broken detective crumbling away but he is more than that he is smart on his feet and somehow manages to get through the unexpected.Joseph Knox is a very talented writer and the way he depicts Manchester is dark yet inviting. He makes you want to fall deeper into the rabbit hole, its up to you however if you make it out.  I also loved how realistic everything is, i can fully picture the world and characters the author has created and it doesn’t feel unrealistic. The novel deals with a lot of dark issues, one particular issue hit me hard but i wont spoil it, but basically imagine Mike Tyson punching you in the gut, not nice right? I couldn’t put this book down at all, in fact im sure i forgot if i had taken a breath at one point. This book is hard hitting and if you love a good detective novel this will be a new favourite for you for sure.