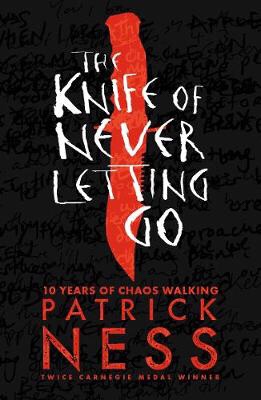 “War is like a monster,” he says, almost to himself. “War is the devil. It starts and it consumes and it grows and grows and grows.” He’s looking at me now. “And otherwise normal men become monsters, too.”

The Knife of Never Letting Go by Patrick Ness was a dark, thrilling and intense novel which had the makings of an exciting read. And it most definitely achieved that feat for me. I’ve read many dystopian novels such as Station Eleven by Emily St John Mandel, American War by Omar Al Akkad and so on. Both gritty and dark in their own way and The Knife of Never Letting Go also had very dark moments. The novel focuses on the young Todd Hewitt who is the only boy left in the town of Prentisstown as boys there become men once they are the age of thirteen. However this town only consists of men due to the women being murdered because of a virus simply known as “The Noise”. Thus, the virus has caused everyone’s thoughts and feelings to be out in the open. No thoughts are left unturned within this town which Ofcourse means no secrets. As a result of this an encounter Tom has within a swamp means that he must flee with an unknown woman who hasn’t been impacted by “The Noise”. Thus in order to protect himself and the woman Tom with his trustee dog Manchee must go to Haven who supposedly have a cure for “The Noise”. On their way the characters are met with many obstacles and also many other people such as the evil and twisted preacher Aaron.

I really really enjoyed this novel from start to finish. Even the first sentence when Tom is with his dog Manchee made me laugh and intrigued. “The first thing you find out when yer dog learns to talk is that dogs don’t got nothing much to say about anything”. I loved the whole concept that every man and animals thoughts are laid bare and out in the open. There was basically no escape from ones thoughts. Even if you tried they would just escape through small crevices in your mind.

Moreover, it was also very dark and gritty. I was expecting this YA book to come with little punch but lemme tell you I felt the force of this like Mike Tyson’s uppercut. Todd for me was a brilliant character who sort of grew and learned as the story went on. I’m not wanting to spoil the story but everything is not what it seems, at first he finds it hard to cope but gradually he learns. The novel is very much focused on him and his thoughts for example, in terms of grammar Tom is technically uneducated as he’s not been taught to read or write and this is something which comes across as his spelling and grammar throughout the novel is all over the place. He basically speaks like a country farm boy. Also, I loved his relationship with his dog, at first Todd doesn’t appreciate his loyal companion calling him a “stupid dog” many many times. But as the novel goes on Manchee becomes the backbone of the journey and it was really touching. Also, the relationship between the mysterious girl and Tom really grows. At first both are silent and hardly talk with each other, however as the story moves forward they grow to rely on each other. You learn a lot about both of them and what they’ve been through and it was just brilliant seeing them become closer after all the obstacles they go through. Especially the main obstacles of Aaron and The Prentisstown army chasing them and at one point kidnapping the girl. What I also liked is that it wasn’t a soppy relationship between Tom and the girl(I’m saying girl because I don’t want to ruin the surprise). It was a relationship based on two people going through some deep deep shit coming together to get out of that shit.

So in conclusion this book is a must must read for any fan of YA and dystopian books. I love books that immerse me into the characters journey such as the amazing 1Q84 by Haruki Murakami. The ending of this book is a proper cliffhanger, I kid you not when I say that you’ll be like “huhhhhhhh whaaaaaaaat” lol. I give it ⭐️⭐️⭐️⭐️⭐️