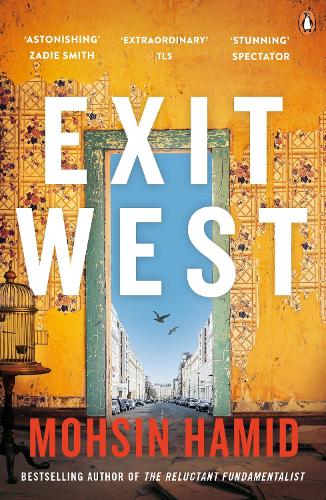 “When we migrate, we murder from our lives those we leave behind.”
― Mohsin Hamid, Exit West

Exit West by Mohsin Hamid was the first book i read during the month of March. Prior to reading the book i was very excited about reading this book as it focuses on immigration and the perils of being in a war torn country. However like a bottle of Coke which has been left open all night this novel quickly loses its fizz.

The novel focuses on the characters of Saeed and Nadia who are from the same undisclosed country in the East. A budding romance however is sandwiched between love and chaos as the city in which they live is under siege by revolutionaries and the corrupt country in charge. As expected the revolutionaries take over however in the name of love Saeed and Nadia put this aside and attempt to push on with their lives trying to shut out the explosions and gunfire . However due to unforeseen circumstances both must flea the country in order to save themselves from losing their lives. By sheer luck magical doors open throughout the world and the couple pay for their passage through a door in their city thus allowing Saeed and Nadia to escape and as the novels title suggests, exit west.

At this point in the novel i felt it loses its fizz, i was expecting there to be more detail. One of the most important thing missing in my opinion was the absence of the journey from their homeland which is on the brink of destruction to the arrival of both characters in the west. This is considered  one of the most harrowing part for refugees when shifting continents and would’ve enabled the reader to feel a deeper connection with the characters. I think had the book focused on their survival in that city rather than them moving from place to place it would’ve been much better.

Moreover i really didn’t like the character of Saaed he was such a stubborn boring old git whereas the character of Nadia was much more exciting and had a strong personality compared to Saaed. It would’ve been a much more interesting read had it focused on Nadia alone. Saaed was more restrained where as Nadia was more adventurous. My favourite part was when the both  of them were spending time together and Nadia whips out some magic mushrooms like “Have you ever done psychedelic mushrooms” (pg45).  I was like damn gal like Nadia you know(who btw rides a motorcycle). Saaed on the other hand was an absolute wimp with no personality whats so ever and he does some things in the book which makes me question whether his balls have dropped.

Anyway some positivity, one aspect i did like about the novel was the way in which the author describes how much cities have become overwhelmed by the increasing flow of immigrants. You could picture how harrowing it would be staying in these camps worrying for your life and whether you will ever fully recover from such experiences. However even though this is the case life must still continue as the author says “the apocalypse appeared to have arrived and yet it was not apocalyptic, which is to say that while the changes were jarring they were not the end, and life went on, and people found things to do and ways to be and people to be with, and plausible desirable futures began to emerge, unimaginable previously, but not unimaginable now, and the result was something not unlike relief”

To conclude i loved this book…psyche nah it had so much potential and could’ve gone better but the characters and story just falls short for me. Its not a book i would read twice for sure. Even though thats the case it shouldn’t put off others